Approval of annual accounts during state of emergency

As part of its targeted efforts to mitigate the negative effects of the Covid-19 outbreak in Luxembourg, the law of 22 May 2020 introduces a set of temporary measures in relation to accounting and filing requirements in Luxembourg.

you can click on the visual to have a bigger view 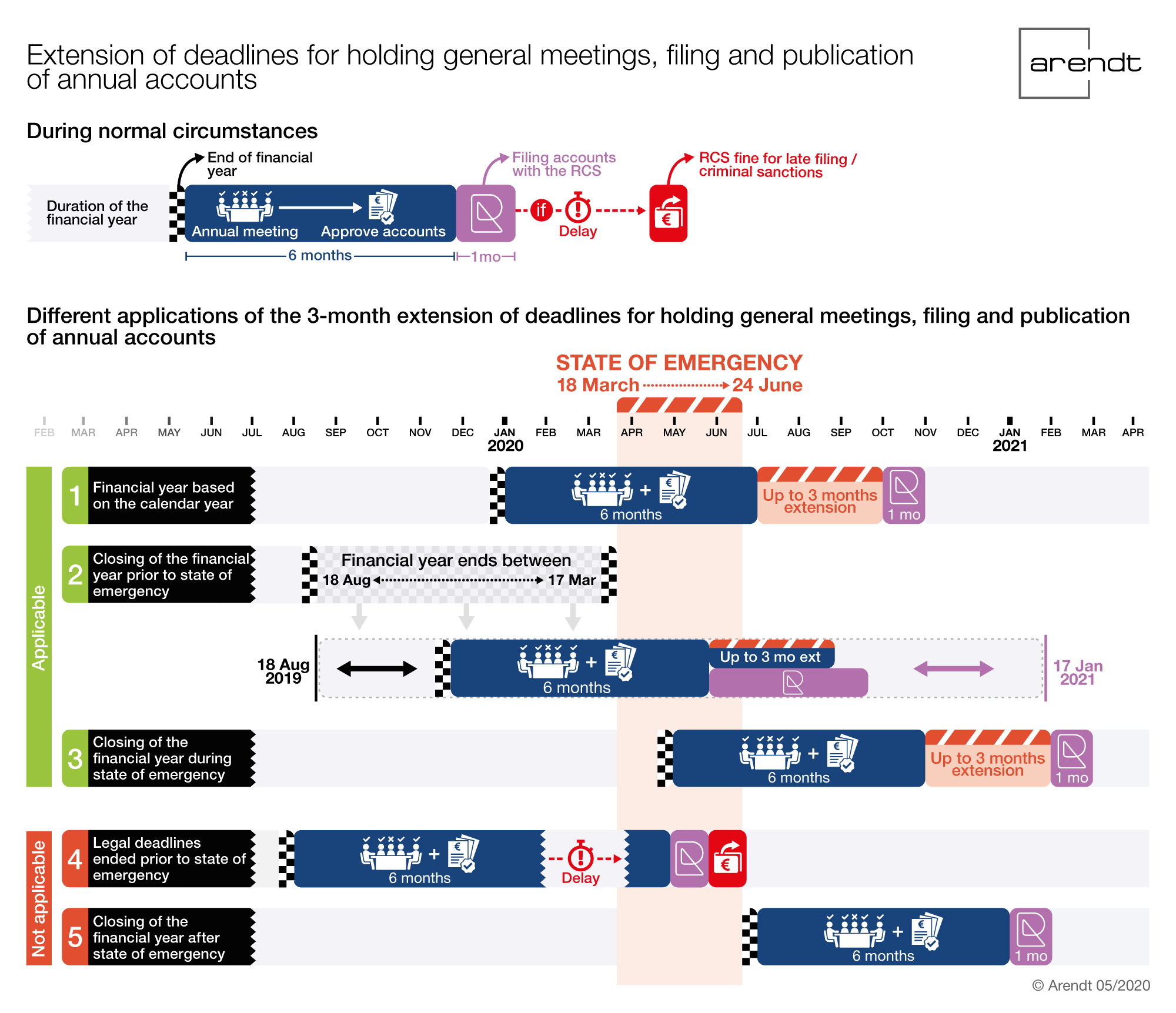 The aim of the law is to extend the filing and publication deadlines for annual accounts, consolidated accounts and related reports as well as the holding of annual general meetings, in order to avoid exposing company managers and directors to liability and sanctions that are disproportionate given the exceptional circumstances.

The law expands on the warning published by the Luxembourg Business Registers (see below) introducing a degree of administrative lenience.

Extension of the deadline for holding general meetings, filing and publication for annual accounts

The law extends the filing and publication deadlines for annual accounts, consolidated accounts and related reports (such as consolidated management reports and audit reports) by 3 months.

As such, companies whose financial year is the calendar year (i.e. those which have the end of their financial year on 31 December 2019) would have 3 additional months to file their annual accounts with the Trade and Companies Register, resulting in an effective deadline of 31 October 2020 (instead of 31 July 2020 as per the usual rules).

All companies will also have an additional 3-month period to hold their annual general meeting. Companies would thus have 9 months (instead of 6 months) to have their annual accounts approved, and would be required to file them with the Trade and Companies Register within 10 months of the end of the relevant financial year (instead of 7 months).

A company whose financial year ends on 31 December 2019 may hold its annual general meeting until 30 September 2020 and file and publish its accounts and reports until 31 October 2020.

In a nutshell: Companies will have a period of 10 months to approve, file and publish their annual accounts.

The extension does not apply where the deadline for filing or holding the general meeting had already passed as at 18 March 2020.

Finally, to prevent potential abuse of the measure, the law specifies that the extension only applies to annual or consolidated accounts, related reports and general meetings of shareholders regarding financial years ended no later than the date on which the state of emergency ends (currently planned for 24 June 2020). Furthermore, it only applies where the filing and publication deadlines or the deadline for holding the general meeting had not yet passed as of the date the state of emergency was declared (i.e. 18 March 2020).

In response to the disruption caused by COVID-19, the Luxembourg Business Registers has published a warning informing companies that an additional administrative period of 4 months has been granted in which annual accounts for the 2019 financial year may be filed. The standard rate will continue to apply during this period.

Please bear in mind that specific rules and deadlines may apply for regulated or listed companies.